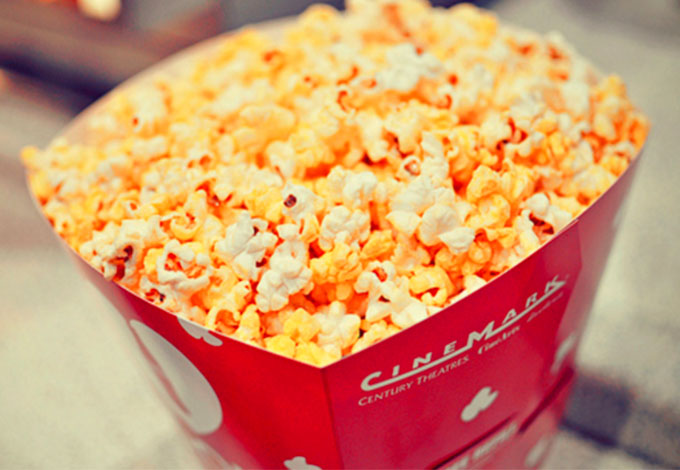 Cinemark is one of the largest movie theater chains in the United States. It’s grown so much partly due to its fantastic concessions and snacks which you can find below.

Here is all the Cinemark concessions with prices for their popcorn and snacks as well:

Are The Concessions Expensive?

One of the soul reasons Cinemark’s food and snacks (especially the popcorn) cost a lot is because people continue to pay them. It’s basic supply and demand.

Cinemark is supplying their delicious popcorn and drinks at a certain price, and people are paying that price. So why should they change how much it costs?

Before you get on Cinemark’s back, know that they’re not the only cinema chain charging high prices for their snacks. Take a look at the AMC popcorn prices or the Regal food prices – both charging quite a bit for their concessions.

The only way concession stand prices will start to come down is if people stopped buying them. But you know that’s not going to happen.

Who can resist the tempting smell of freshly made popcorn wafting through the air on your way into the theater?

The prices are no doubt higher than the grocery store, but remember – the revenue of concessions sales makes up a large portion of the profit for Cinemark.

Without it, prices for admission tickets would likely start to increase, forcing more movie-goers to consider alternate ways to watch their movies, which will lead to a further decline in profit – and we see a vicious cycle starts to form.

Unfortunately, it looks like the current Cinemark concession prices you see above are here to stay.

Cinemark’s Most Popular Food And Snacks

You already know the answer to that question – it’s their popcorn. Cinemark popcorn is delicious because they put in a lot of time and effort into ensuring they only serve up the best popcorn. But why did popcorn become so popular?

Popcorn has been the go-to movie snack for nearly 100 years now, after the Great Depression there was a massive rise in demand for the cheap, easy to make, and delicious snack. Vendors were quick to set up popcorn stands outside the cinemas, and when the cinema chains saw their success, they were even quicker to start serving the popcorn inside their own walls. 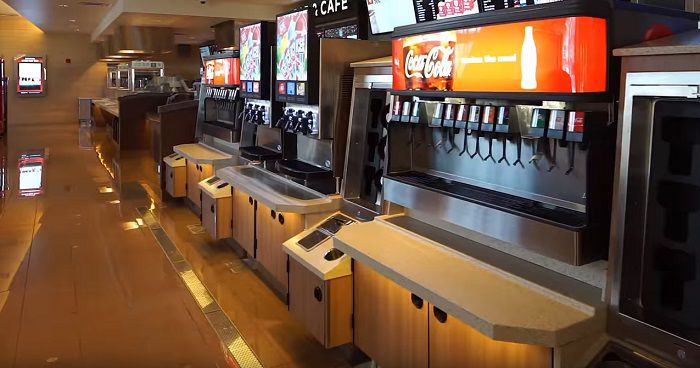 The Fountain Drink Bar At Some Of The New Cinemarks

Since then, it’s become a difficult task to resist the temptation of snacking on a tub of the goodness whilst enjoying one of the latest blockbusters. Of course, popcorn isn’t the only snack available at the Cinemark’s concession stand.

A few of the other favorites include their Nachos and their Chilli Cheese Fries – delicious on all occasions.

How Healthy Is Cinemark’s Popcorn?

If you’re on a diet or looking to keep your calories low, skip the popcorn. A medium-sized popcorn from Cinemark is 800 calories with 45g of fat. Upgrade to a large and you’ll get a massive 1,120 calories in total, with 63g of fat.

Here’s a table with some caloric information on all their popcorn, and a few of the other snacks as well:

So – instead of asking How much does a large popcorn cost at Cinemark? You may be wiser to ask How many calories does Cinemark’s popcorn have? But let’s be real, you’re going to the movies to enjoy yourself, not to count every calorie in every bite you take. Choose what you want to eat, and enjoy it!

I know I’m being corny but life really is butter with you in it 💛🍿 . . . 🍿 @cinemark . . . . 🍿 2020 popcorn bucket is now out for $15! It’s about $12 if you’re a movie club member (if you can guess, we are! We’re huge movie goers and we love it! Mainly cuz they have kettle corn!) bucket refills are $4 for members and $5 for non-members! Such a great deal! . . . .🍿 Tidbit of us: Mico took me to see Star Wars last night! I won’t give any spoilers so that’s it hahaha. Fun fact: the first movie that Mico took me to see almost 6.5 years ago was Don Jon 🙈 . . . . ————————— #cinemark #cinemarkmovies #cinemarkmovieclub #kettlecorn #cinemarkpop #cinemarkpopcornbucket #popcornbucket #vallejo #visitvallejo #vallejofoodie #foodiecouple #datenight #starwars #bayareafoodie #bayareadatenight #bayareadateguide #vallejo #movielovers #popcornlovers

Click here to download the full PDF with all the nutritional information on the menu at Cinemark.

The popcorn salt that we use to pop the corn with does have some soy and could contain dairy.

Additionally, Cinemark states employees would be able to make a fresh batch of popcorn without salt if a guest would prefer it this way.

To avoid disappointment, call up your local Cinemark beforehand to confirm whether or not they’d be willing to make a fresh batch of vegan-friendly popcorn before you head down.

Are There Any Cinemark Popcorn Coupons?

You bet! The best way to lower the Cinemark popcorn prices for yourself, or any other snack at the concession stand, is to signup to Cinemark’s weekly newsletter. It’s 100% free and the only way to get real discounts on their food.

If you do want to Google for coupons, most of the ones you’ll find on the most popular coupons sites unfortunately don’t work. These sites just advertise combos that are available at all so you click on them (which earns them money).

The only sure fire way to save money on popcorn is to get coupons from Cinemark themselves. Interested? Click here to sign up to their weekly newsletter.

You’ll get info on movies, updates on the food they have, special invitations to certain events, and most importantly, the latest and greatest coupons to save some bucks.

Is Cinemark’s Popcorn Worth The Price?

It’s a question only you can answer. You’re the one paying for it after all.

If you’re looking for a possible alternative to try, check out the Cinemark Bistro menu instead. The food’s fancier than the concessions stand, but that also means it comes with a higher price. 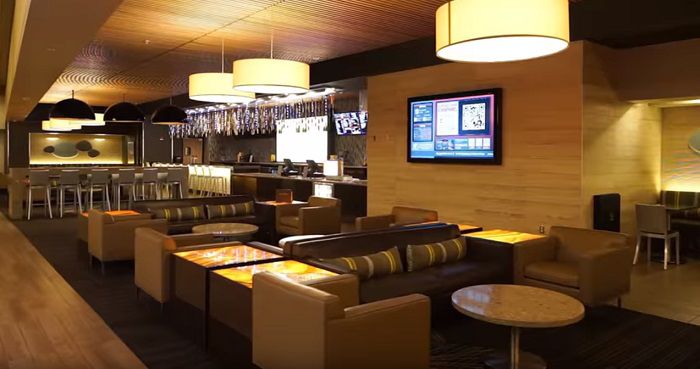 The Bistro Delivers A Premium Menu With Premium Seating

Altogether, the parent company operates cinemas at over 525 locations around the world, mostly in the Americas with a few locations in Taiwan as well.

Cinemark, like many of the other chains in the world, operates within the area that the concession stand is where they make the majority of their profit. And in this concession stand, there has been constant innovation over the years.

One thing that has always remained certain, though, has been their popcorn. Although in recent times, there’s been a move into a more upmarket service offering at select Cinemark cinemas.

This move was made is due to the declining admissions through the USA and the rest of the world. More and more consumer are happy to stay home and stream movies on the many platforms available. Looking at you Netflix.

The improved Cinemark concessions stand has been a vast success for Cinemark themselves and many of their competitors, with both admissions and overall profits increasing.

If you’d like to get in touch with their staff to discuss the Cinemark concession prices, the best way would be to contact them on social media:

All in all, Cinemark is a great cinema chain to watch the latest movies at, and they have extensive concessions to choose from. Sure, the prices of their popcorn and other snacks are a bit high, but they’re definitely worth the price if you’re after the traditional movie experience.

Popcorn has been the traditional cinema snack for the past 100 years, and it’ll be that way for the next 1,000 years as well.

If you have any more questions about the menu or the prices, leave a message below.

Hello does cinemark have their popcorn in ready to pop bags or can you tell me the name so I can try to order the best popcorn ever. I always go to the christiana mall cinemark theatre and I am really missing my popcorn. Hope you can help me. Be Safe