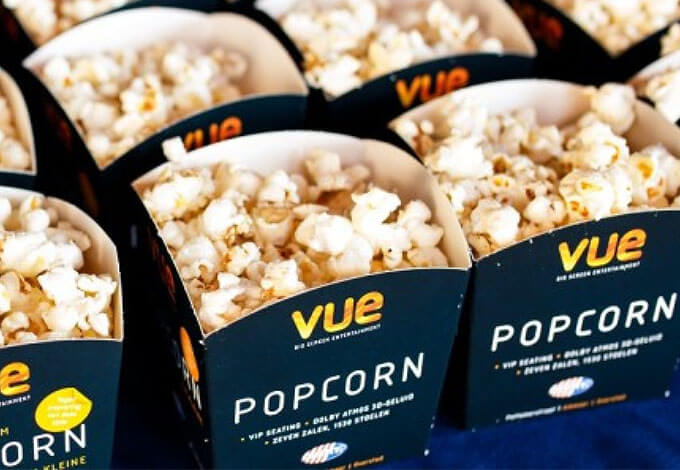 Vue is one of the most popular and largest cinema chains in the UK. Their candy bar is stocked with tasty popcorn, drinks, and plenty of other snacks for you to choose from. Find out how much it all costs here.

Food, popcorn, and drinks have always been quite a bit more expensive than the grocery store because it’s the way movie theatres make the largest portion of their profits.

Generally, the margin on tickets sales themselves aren’t very high, as the movie studios take a big portion of the total ticket sales for themselves. As such, many theatres around the world, have maintained a high price for their food to keep their profits steady.

Zack Akai, a movie theatre employee, had the following to say on the subject:

The concessions are the price they are because enough of you people pay for them. Don’t whine that the medium popcorn costs $8 and then proceed to buy two of them. If enough of you stopped paying for overpriced concessions items, the theater chains would be forced to lower prices. But until you do, they’ll just keep going up.

They are a business after all – they need to make money some way.

If Vue wasn’t selling any popcorn, no drinks were being poured, and no hotdogs were being eaten because of the high prices, they’d be forced to reduce them. But people still pay them, so Vue has no incentive to lower the cost.

On top of that, they’re not the only chain in the UK with high candy bar prices. Just check out one of their largest competitors candy bar menu, the Odeon food prices.

In essence – the Vue’s food prices are as high as they are because people still pay them. It’s that simple. Of course, you could always work the system like this guy:

Can You BYO Food?

Fantastic news! If you’ve had enough of the high popcorn prices, Vue allows you to take in food from outside stores. The only condition is that the food isn’t hot and if it’s a beverage, it must be non-alcoholic. 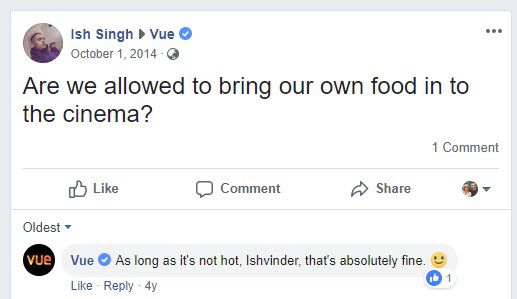 Vue Confirming You Can Bring In Outside Food Into Their Cinema

And on Twitter, they’ve replied a few times to similar questions:

Hot drinks can pose health and safety risks. It’s a condition of alcohol licensing that we don’t allow guests to bring their own.

@LieseStanley Hi Liese, did you know you can take your own sweets and drinks to Vue? The only things not allowed are alcohol and hot food.

So go forth! Stop over at Aldi or Tesco beforehand, stock up on some candy, sweets, and drinks, and walk on into Vue without buying their popcorn if that’s what you want to do.

Are There Any Vue Popcorn Deals?

Unfortunately, it looks like legitimate Vue popcorn deals are hard to come by. There are plenty of regular deals for tickets and such, but none for any of their food. Sorry! 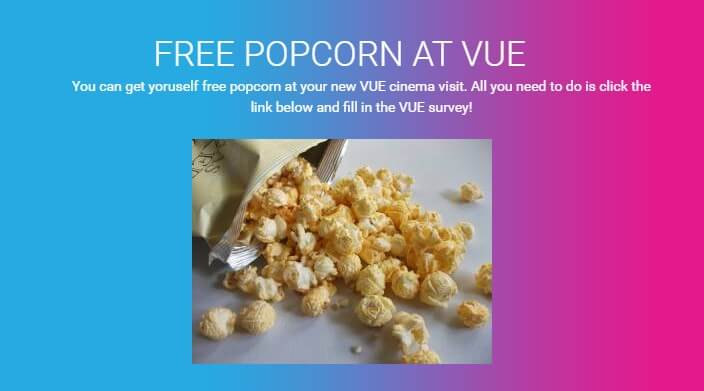 Get Some Free Popcorn At Vue By Taking The Survey

However, you could go a step further and try and get some popcorn for free.

Vue currently has a 5-10 minute survey for any of their previous customers. If you fill it out and buy a drink the next time you watch a movie with them, you’ll get a free popcorn as well 🙂 Not bad!

Click here to head their feedback page and start the survey.

Despite the complaints of the high prices from many of those voicing their opinions online, their popcorn is still the most popular item on their menu. It’s been a traditional movie theatre snack for the past 100 years after it became popularised due to its cheap cost during the Great Depression. 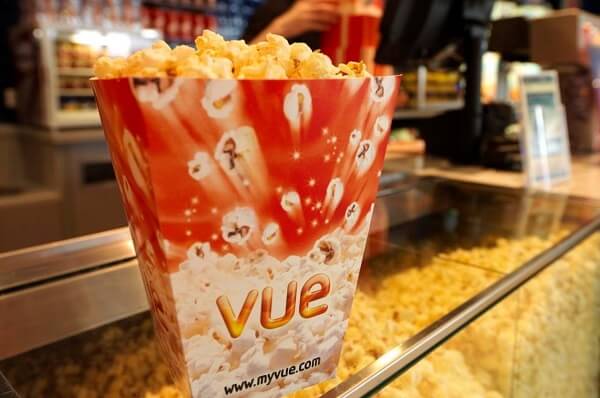 Vue’s Popcorn Is Hard To Walk Past (source)

Today, the snack has spread all across the world, with cinema chains in every corner of the globe serving up the buttery goodness to patrons. And they’ve all spent a lot of time perfecting the art of popping the perfect popcorn and flavouring it in more ways than one.

Still think the Vue popcorn prices are too high to justify? The Cineworld food prices are quite similar so don’t take it all out on Vue just yet.

Now to some, popcorn may be a little dry on its own, which is why soft drinks are the next go-to for movie-goers. At Vue in particular, the Tango Ice Blasts is an absolute fan favourite. It’s light, it’s smooth, it’s frothy, and it’s delicious. What more could you want?

Food and popcorn at Vue may taste delicious, but it comes at a high calorie cost. One of their small popcorns (46oz) comes in at 233 calories. Go two sizes up to a large popcorn, and you’ll consume 767 calories along with your movie.

There’s a reason why movie popcorn should be a treat you enjoy every once in a while – it’s not really that good for you. That’s the same for many of their other snacks as well.

Here’s a list with some of their popular food and the calories in it:

As you can see, a lot of their food comes with quite a high calorie count. It’s always good to know what you’re eating.

Wondering whether anything on their menu is vegan? Here’s a list of a few of the vegan certified food items on their menu:

Sorry to say – but their popcorn is the only thing Vue has that’s officially vegan! But the good news is you’re more than welcome to bring in your own food 🙂

Vue is one of the youngest, but still one of the largest, cinema chains in the UK. Only because they were formally SBC International Cinemas. It all changed when Warner Village Cinemas bought SBC in 2003 and decided a rebrand was in order. And so, Vue was introduced not only to the UK market, but also to customers in Germany, Netherlands, Denmark, Italy, and a number of other European countries.

One of Vue’s classic promotional videos they aired:

As of 2020, Vue is showing movies across all of its 1,989 cinema screens, at more than 220 locations around the world. Recently, Vue sold for £935 million in one of the biggest cinema chain deals in history. It was sold to OMERS Private Equity and Alberta Investment Management.

Vue is yet to introduce a subscription style membership for customers where they can pay a single price and see a certain amount of movies each month. It’s only a matter of time before Vue jump on board as well.

All in all, yes, now that you’ve found out how much the Vue popcorn costs, you may be a bit more inclined to say no next time you head in. It’ll be tough though as the smell of fresh popcorn is a hard temptation to resist.

With Vue openly allowing all customers to bring in food (nothing hot or alcoholic), why not bring in your own snacks to enjoy at the movies?

If you have any more questions about the Vue food prices, leave a comment in the box below.

Are the soft drinks refillable