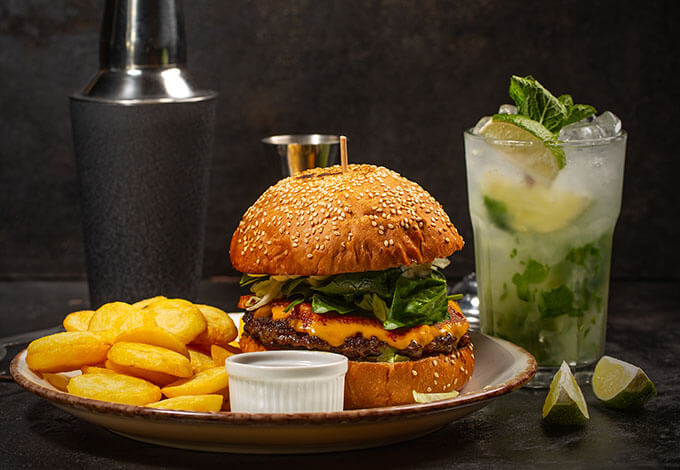 Popular Food On The SMG Menu

With such a fantastic variety of food to choose from on the menu, it can be tough to land on a single item. Thankfully, there are plenty of others who’ve already sampled many of their dishes already, sharing their experiences with the world.

First up – their pizzas and flatbreads. Raving reviews can be found all over the place for almost all the varieties of flatbreads on their menu. If you can handle a bit of spice, definitely give the Spicy Buffalo Chicken Flatbread a go. 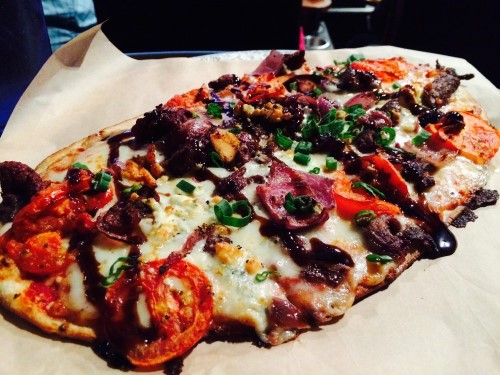 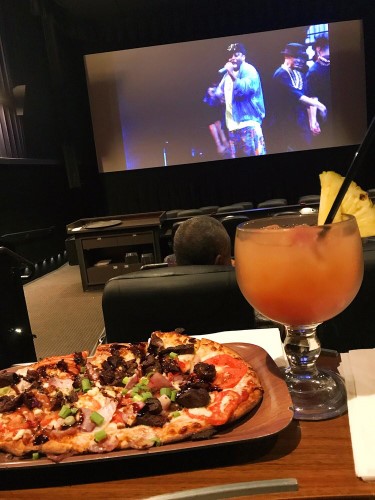 Fancy A Flatbread With Your Movie? 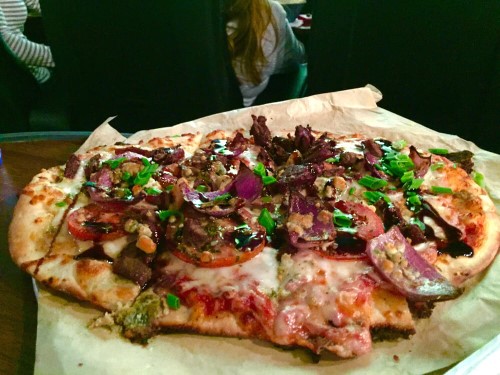 Perfectl Flatbread With Plenty Of Toppings

Not really vibing with the flatbread? You can’t go wrong with their Ballpark Chicken Nachos. Plenty of tortilla chips, topped with roasted chicken and jalapeno tomato queso. Delicious. 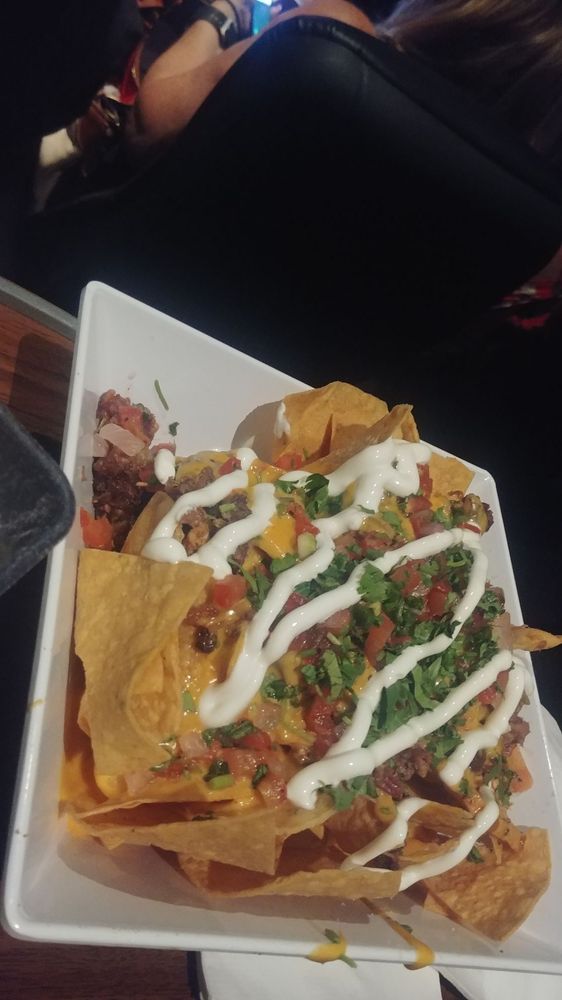 Can’t Go Wrong With Nachos And A Movie 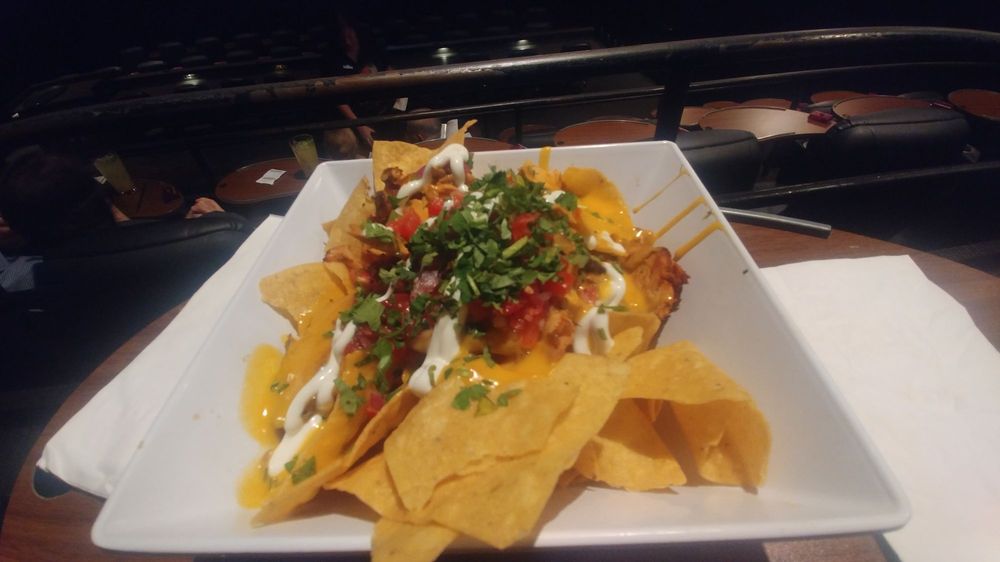 Now, there’s one last section to choose from on Studio Grill’s menu, and that’s their dessert. There are a few contenders for the top spot like the Frozen Hot Chocolate and Chocolate Beignets, but neither holds the crown.

Instead, feast on the Brownie Sundae and you’ll be finishing off your movie in a way you’d never imagine. 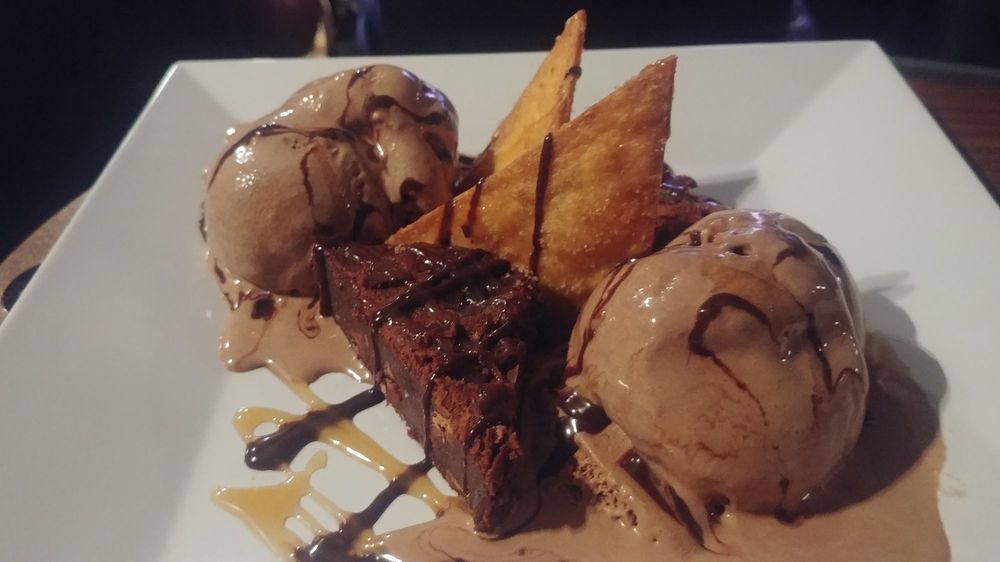 One Of The Best Desserts At Studio Movie Grill 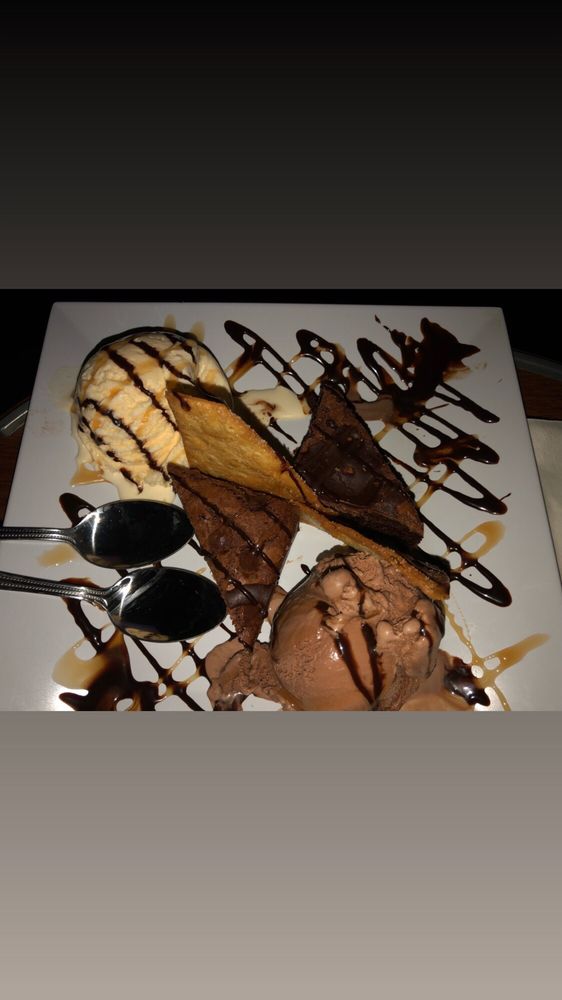 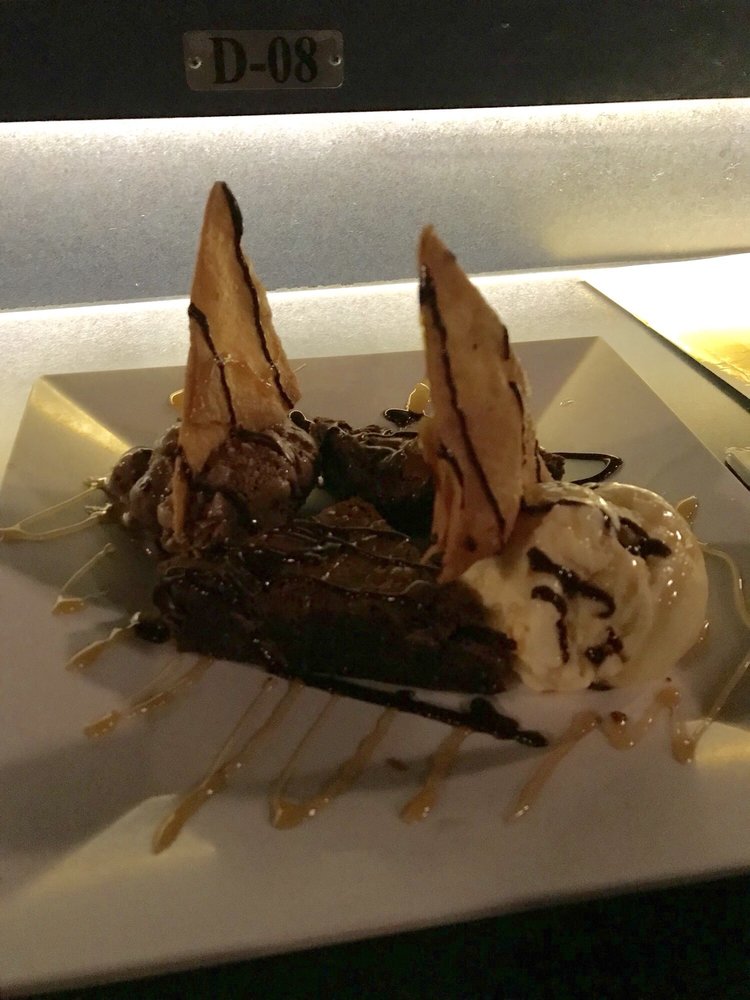 You Deserve This Delicious Creation

As you can see, even the fussiest of eaters will be pleasantly surprised glancing over the Studio Movie Grill menu to find some of the options above.

The wide range of delicious food above gives even the largest cinemas chains’ menus a run for their money. See how it compares with the AMC Dine In menu and the Movie Tavern menu – both premium VIP cinema experience in the US.

Does The Menu Change?

Yes & no. From cinema to cinema the menu is pretty much the same. For example, cinema locations in Arizona, California, Florida, Georgie, Illinois, North Carolina, Texas, and Virginia all serve up the exact same food. Although prices vary by $1-$2 between each location. 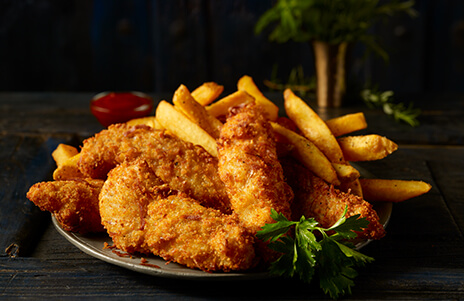 The only two areas which serve a slightly different menu, are the cinemas in Pennsylvania and Indiana. Even then, the only thing that’s different is they don’t serve any of the Asian-style Bento boxes (which aren’t very popular choices to begin with). 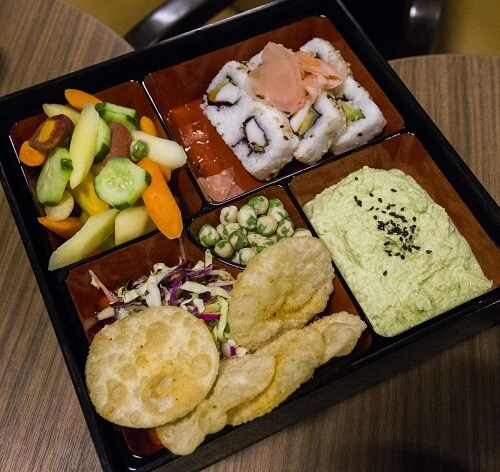 Bento Box Availabe On The Menu At Studio Movie Grill

Other than that, the menu above is pretty accurate for all of their locations, even the Plano and Rocklin locations.

With that being said, the menu will change from time to time for variety and to ensure you don’t get bored of eating the same dishes over and over.

As the food on their menu isn’t prepared and packaged with the exact same specifications each time, Studio Movie Grill has chosen to not release and official nutrition guide for their menu.

This is surprising considering the ever-increasing rise of health-conscious eating among the general population.

Hopefully, we’ll see them add an official nutrition guide to their website in the near future.

If you want a very rough guide as to how many calories are in some of their meals, check out MyFitnessPal. There are a few user-generated nutrition guides.

Similar to the nutrition guide, there is no official allergen information sheet which has been released by Studio Movie Grill. Again, we’re surprised they don’t offer this information on their website.

Reports by previous customers say that their flatbreads can be available in a gluten-free option, and their Black Bean Burgers are the only vegan option on top of the fries and salad.

Lol I was at the Studio Movie Grill earlier and couldn’t help but notice the ad that said “we have something for everyone” mind you the only vegan/vegetarian options were black bean burgers and fries or a salad that cost $12.50. 😭

One user even sent a message directly to Studio Movie Grill’s official Twitter account seeking clarification of their vegan options. They didn’t respond.

@studiomoviegril Hi there, excited to now have a Studio Movie Grill near me! Can you tell me if any of the menu items are vegan? (i.e. edamame, pretzel bites, popcorn, etc.? And if the popcorn is, does the salt contain dairy? Oddly, some does!) Thank you!

Just like many of the other large cinemas in the country, you’ll be hard-pressed to find and coupons you can use on the Studio Movie Grill menu.

Instead, they invite you to join their membership club, SMG Access – a loyalty program where you’re rewarded with points for every ticket you purchase which you can use to redeem deals and specials.

They’ve even employed some of the biggest stars in the industry to join the fun:

Where Are Their Cinemas?

Now that you’ve seen what’s available on the Studio Movie Grill menu, we’re sure you’re looking forward to getting down to one of their cinemas and enjoying their food with one of the latest movie blockbusters.

You’ll need to know where you’re going, though. Here are all the Studio Movie Grill locations:

Founded in 1999 by Brian Schultz, Studio Movie Grill has successfully carved out a valuable niche in the highly competitive industry of selling movie tickets.

The unique experience on offer at their cinemas was one of the first places to provide the movie-grill concept instead of the traditional movie with concessions. 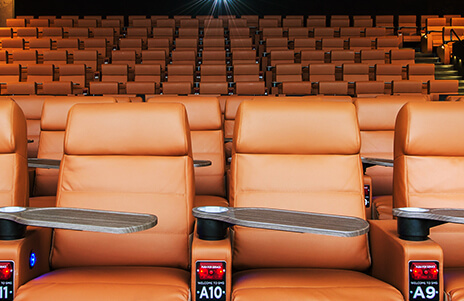 Movie-goers have taken warmly to the service, helping the company grow to more than 31 locations in 10 states around the country. All which offer the delicious Studio Movie Grill menu at wonderful prices.

On top of their fantastic service offering, the company has made it its mission to give back to the community as much as possible. They play an active part in the community around each of their locations, even dedicating a full-section on their website to their outreach efforts.

Studio Movie Grill was proud to state on their LinkedIn profile that they sometimes contribute to more than 300 charitable organisations in a year.

Check out some of the outreach they did in 2016:

You can even directly support a charity yourself with your order on their menu. Grab the 2 For $28 Sharing Menu ($29 in some states) and 5% of the proceeds will be donated to local non-profits.

All up – Studio Movie Grill has done a fantastic job carving out a niche in the industry (vastly helped with a fantastic menu on offer). We’d love to see their company continue to innovate and grow in the coming years.

Talk To Their Staff

Want to get in touch with their staff to send them some more questions about the Studio Movie Grill menu? Send them a message on social media:

Otherwise, you can give them a call on 972-388-7888. Or, you can see if your question has already been answered on their FAQs. Lastly, feel free to send them a message directly through their website.

The food available on the Studio Movie Grill menu is nothing short of mouth watering. Plenty of different options to choose from to make sure you never get bored of eating the same thing.

If you have any more questions about the SMG menu, leave a message below.